My obsession with the country of Brazil began when I saw the film City of God.  Adapted from the novel of the same title, written by Paulo Lins, it’s the story of a society.  In the 1960’s the Brazilian government began to move the favelas outside of the city, which created the suburb, Cidade de Deus. Brazil moves in retrograde to the United States. White flight created the suburbs, as we know it in the States. The suburbs in the States signified a place at ascend to whereas in Brazil the suburbs were the last stop for the poor before being kicked out of the city completely. Comparing the social structures of Brazil and the States, feels similar to comparing fraternal twins. They are similar in conception, yet have glaring oppositions which makes the two countries unique. Brazil is what America could be if we lost our love of segregation, if white people embraced the possibility that they may in fact have African ancestry, and if black people were encouraged and allowed to “whiten the race” by intermarrying and procreating with whites. If class became the deciding factor as opposed to race, “City of God” could have easily been “The Wire”. But it’s not.

City of God is full of color. The cinematography of César Charlone really captures the spirit of Brazil; a country known for it’s celebration of color. Every shot in the film could stand on it’s own. What I love the most about this film is how it looks. The same could be said about my obsession with the country. I was initially attracted to how it’s aesthetics. Being able to live here has been like finally getting a date with your insanely attractive crush. Yesterday I had the honor of going to the actual Cidade de Deus. It was nothing like what was shown in the film.

My good friend Karmel, who lives in Rio, came with me. We got off and wandered for a while before asking for help. We were told to walk down a road, with a putrid river running through it. The street sign read, “Avenida Cidade de Deus” but instead of the colorful favelas that stack on top of each other and seem to ascend into the sky, we were greeted with high rise apartments. 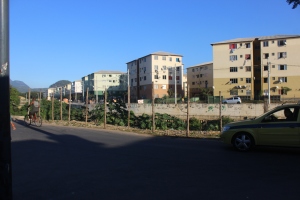 I felt like I was in a Juvenile video, straight out of the early 2000’s. Little kids running around, graffiti, litter, music blasting. The faint smell of burning garbage in the air was the only factor reminding me that I was still in South America.

I asked a resident who was passing by if I could ask her a few questions, she said it “depends”. She told me that the apartments were new, about a year and a half old. I was imagining that these new apartments were in the place of the original hill side favelas, that were such a big part of the film. Turns out, that not was the film not actually filmed in Cidade de Dues but these apartments are brand new and for the millions of people still being moved out of the center of Rio. We left after walking around for a while. Aside from the high rise and the pollution, the suburbs had a cozy community feel. Their were lots of little kids out playing and the occasional police car strolling through.

As we were preparing to leave we ran into a woman who started out giving us directions then ended up schooling us on the history of the neighborhood.

The City of God is a highly controversial film in the actual neighborhood. People say the reality was manipulated to make it worse than what it was. We went into the housing project where the actual book was written and talked to a local shop owner who was around during that time. The part that stuck out to me the most, in regards to his critic of the film, was that the stars of the film weren’t all black. He claims many were visibly mixed race, and very light. There are very few explicitly white characters in the film. A film about societal violence featuring a mainly black cast is the norm, but if this wasn’t the truth, why was it recorded as such.

Well, there are a few answers to that. We are normalized to seeing people of darker complexions as, poor, dirty, violent, victimized and aggressive. It’s a tactic used to help put a certain type of people in power, one that we regurgitate today. Walking through Cidade de Deus, I didn’t feel like I was in anymore danger than walking around the west side of Baltimore. However, these are both urban environments full of poor black people. I’m a product of that environment, Cidade de Deus is a similar habitat. I wasn’t surprised at the residents close mouthed responses to my questions, nor was I surprised at our impromptu tour guide and her overwhelming warmth and desire to share her experience with us. Cidade de Deus like my city or any other urban black environment has it’s good and it’s bad. However, due to the people who are in control of images and the way they are shared, we have a very skewed idea of what these places are like.

It was truly an honor to go to this neighborhood and see that it’s doing pretty well. It wasn’t gentrified, it was full of local shops, the kids seemed happy and it was pretty relaxed. When our tour guide asked why I had come, I told her how I fell in love with the country of Brazil because of this film. She was amazed. In retrospect, it speaks to the power of film in my life. I watched a movie in middle school and began to dream about Brazil. Because of this dream I ended up spending close to year in here, I started a blog, drunk Ayahuasca, learned a third language, became an adult…

I watched the film again last night. My view of it has changed since living in Brazil and going to the neighborhood, I see specks of white supremacy, and a strong “othering” of the characters in it now. The images are still beautiful. But for what it’s worth, this one film inspired my epic odyssey. And for that I’ll be forever grateful.

"There's no life, but the life you'd die to live." -Sunn m'Cheaux

It's In The Cards

Writing journal of author Tananarive Due

TIME TO REGISTER TO VOTE

"all the women are white, all the men are black, mas algumas de nós são bravas""

My Table For One

One Woman's Quest for the Richness of Self

The site dedicated to Brazilian women of African descent