Capão is a very special place where time doesn’t exist and the internet is so slow it might as well not exist. It is the perfect place to go and decompress, grow your hair out, not shave, , be one with nature. I found myself almost falling over at times because I was star gazing and it’s possible to see other galaxies in Capão. The town is small and hard to get to. You have to take a bus from Salvador to Palmeires then a van or car to Capão. It’s all very dusty and cowboy-ish 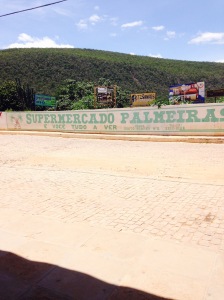 The town of Capão consists of normal black/indigenous Brazilians with clean houses and ipods, hippies and tourists passing through for the vibes, , energy, mountain trails and general lax atmosphere. Within the first day of Capão I was naked in two different rivers. I had an insightful conversation with a black Colombian woman. She was the only black hippies I encountered in my time there. Her son was blond and white, she was brown.  She told me how his dad was Argentinean and how they travel a lot. They lead a nomadic life. She told me she thought I was Brasilian or maybe even Colombian. She was surprised that I was from the states, (which will be the topic of a much longer post in the future). She kept trying to get her son to come to me, she would say, “ella e sua Tia, mira mira a ella.” He cried. I guess he didn’t see family in me.

Later in the day I found myself sitting in the town square at the super market reflecting on how a place like Capão could even exist.

The locals seemed like they weren’t interested in the lifestyle that many came from all over to get a piece of. Many of the hippies were musicians,  Cagıl the friend I was staying with is a bad ass singer and flute player. She took me to a sauna and drum circle and I was coaxed into singing praises to Jah all night. It was as strange as it was exhilarating. I was in the woods with a bunch of different types of white people, my black American distrust kicked in, but then I looked up at the stars and remembered that I was safe. These were good white people. Seriously. But I also remembered how the woods or nature can be seen as refuge. When people are looking for freedom they run to the woods. In the game of “Tag” base is usually a tree. I don’t think I’ve ever been safer than I was that night in the woods.  Although I may have came of as stand offish to the people I met because I was extremely high and I’m usually quiet in new environments, eventually I warmed up. I plan on going back to there for a few weeks before I leave Brazil in August. There are things I need to discover.

"There's no life, but the life you'd die to live." -Sunn m'Cheaux

It's In The Cards

Writing journal of author Tananarive Due

TIME TO REGISTER TO VOTE

"all the women are white, all the men are black, mas algumas de nós são bravas""

My Table For One

One Woman's Quest for the Richness of Self

The site dedicated to Brazilian women of African descent